New research on the Zika virus 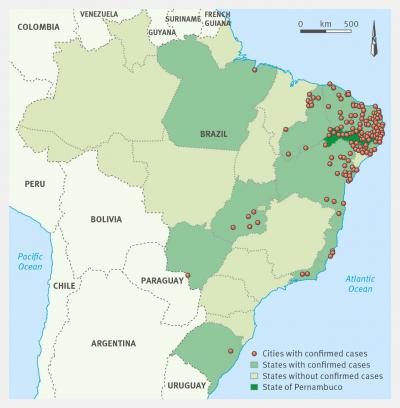 A map of Brazil showing cities with notified cases of microcephaly in Brazil up to Feb. 13, 2016. It’s adapted from Brazilian Ministry of Health. Recife, the centre of the Zika epidemic, is located on the coast in the densest part of the cities with confirmed cases. (Image credit: The BMJ 2016)

Further evidence is linking the Zika virus to fetal brain damage and now to serious neurological disease in adults.

In the first paper researchers performed brain scans on 23 babies born to mothers thought to be infected with Zika. The scans revealed a majority of the babies had severe brain malformation and scar-like lesions on the brain, with a buildup of calcium deposits.

In the second paper researchers described six people with neurological symptoms consistent with autoimmune disorders after contracting the Zika virus. “Though our study is small, it may provide evidence that in this case the virus has different effects on the brain than those identified in current studies,”said the author of the study Dr. Maria Lucia Brito Ferreira of Restoration Hospital in Recife, Brazil. However “much more research will need to be done to explore whether there is a causal link between Zika and these brain problems.”

The first research paper was published in the British Medical Journal on April 13, 2015.

The second research paper will be presented at the American Academy of Neurology’s 68th Annual Meeting in Vancouver, April 15 to 21, 2016.

Researchers have successfully restored some movement to the fingers, hand, and wrist of a quadriplegic patient by using recorded signals from his motor cortex, allowing him to perform daily living...

Palliative care viewed as a stigma, despite improving quality of life

Canadians with cancer and their caregivers, associate “palliative care” with impending death, and consequently are not taking advantage of the benefits  early palliative care can bring to a patie...