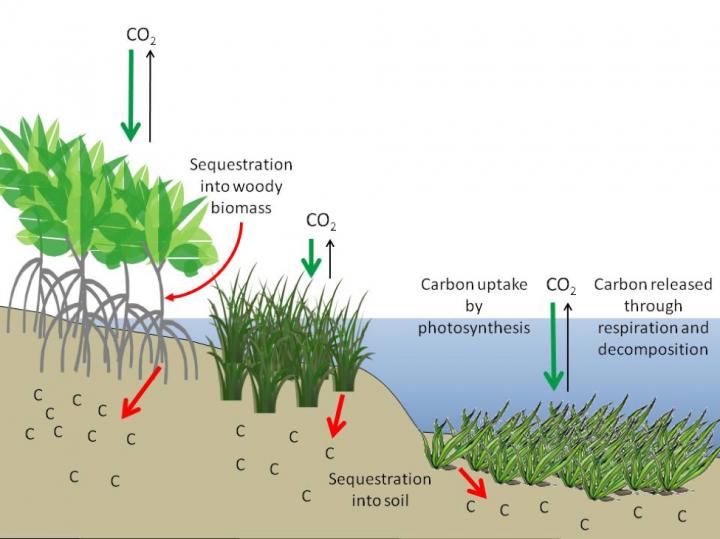 Illustration of the efficiency of mangrove forests (left), salt marshes and seagrass beds as reservoirs for carbon. More carbon dioxide is taken up from the atmosphere (green arrows) than is re-released (black arrows), while a substantial amount is stored in soils (red arrows) for hundreds to thousands of years if left undisturbed. (Image by Howard et al.)

A new study suggests that coastal wetland ecosystems such as mangrove forests, tidal marshes and seagrass meadows are great at mitigating negative effects of greenhouse gases. To study how effectively each marine ecosystem utilizes greenhouse gases, researchers evaluated how CO2 is stored within the system and for how long. Their estimations suggest that mangrove forests alone capture and store up to 34 metric tons of carbon annually – approximately the amount released by 24 million passenger cars in a year. But it’s the soil that makes coastal wetlands such natural carbon sinks. Wetland soil draws CO2 from the atmosphere and effectively stores it within the ecosystem for thousands of years. Researchers found that kelp, corals and marine fauna are not as good at managing CO2 as the wetlands.

Original paper published in Frontiers in Ecology and the Environment on February 1, 2017.

Ocean acidification effects differ depending on the species’ sex

Ocean acidification (OA) occurs with the increase of human-made carbon dioxide in the waters. The impacts of acidification on marine ecosystems have been studied extensively over the past decade, but ...

A small percentage of genes determine much of our height

How tall we are is largely determined by our genetic makeup, and much of that is inherited. But a recent study reveals that there are 80 genetic variants (alleles) that occur at lower frequency, but h...