Scientists solved the mystery of the mass Allosaurus grave 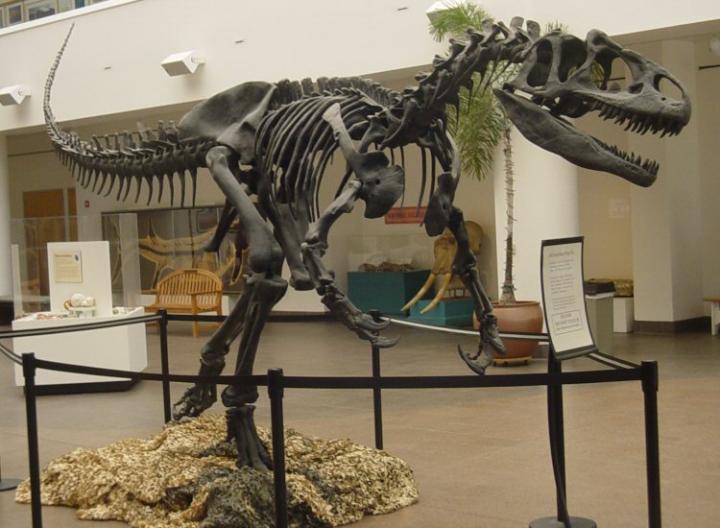 This is an Allosaurus fragilis skeleton mounted in the lobby of the San Diego Natural History Museum. (Image via Wikimedia Commons)

The Cleveland-Lloyd dinosaur bone bed has been a puzzle for paleontologists for many years. It’s home to the densest collection of Jurassic era dinosaur fossils, which includes numerous Allosaurus fossils. Since the bone bed’s discovery in the 1920s, numerous hypotheses have been proposed to explain its origin—including theories of a mass poisoning event, drought, or even dinosaurs getting trapped in thick mud and unable to escape. Using new technologies, authors of a new study have concluded that the bones have been accumulating in the quarry over time, not as a result of a single fatal event. During periods of drought, small bone fragments in the quarry were created through weathering and erosion of bones disintegrating at the surface. In flooding periods, carcasses washed into a small pond, creating an environment where no other creatures could survive, and other dinosaurs could not eat the carcasses.

Irregular mealtimes reset one of our biological body clocks

One of the major biological cycles of the human body is influenced by mealtimes, a new study suggests. The human body runs on a roughly 24-hour cycle, controlled by a "master" clock in the brain and p...

Estimates in greenhouse gas reductions on the terms of the Paris Agreement can be improved by 10%, if participating countries make a commitment to submit their climate plans every five years. Paris Ag...