How do Canadians use, think about, and interact with science? How do we compare with our peers in other developed nations? Are we ready to embrace science for the future of our country? These are just some of the questions addressed in Science Culture: Where Canada Stands, a new report released on August 28th by the Council of Canadian Academies.

On August 27, the Science Media Centre of Canada held an embargoed webinar in advance of the report’s release where journalists can hear from some of the members of the expert panel that produced the report:

Arthur Carty is the Executive Director of the Waterloo Institute for Nanotechnology and was chair of the expert panel. He has also served as chair and/or member of numerous boards at many organizations, including the Canadian Nuclear Safety Commission, the Canadian Space Agency, Genome Canada, Mitacs, and was the Founding Chairman of the Canadian Light Source.

Marc LePage is President and CEO of Génome Québec. He is an expert in international partnerships and, since 2009, served as Special Advisor, Climate Change and Energy for the Embassy of Canada in Washington, D.C.

Jay Ingram is Chair of the Science Communications Program at the Banff Centre; he’s also a former co-host of Discovery Channel’s “Daily Planet” and a former host of CBC Radio’s “Quirks and Quarks”. He’s published 12 twelve books, and received numerous accolades and awards for his outstanding contributions to the popularization of science.

To see a copy of the slides from the webinar, click here.

Infographics summarizing statistics from the report are also available; they should be credited to the Council of Canadian Academies: 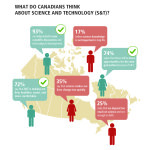 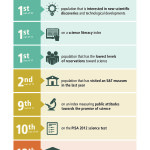 A new genetic study has clarified the relationships between the ancient and modern cultures in Canada’s Arctic. The results confirm that a single group - known as Paleo-Eskimo - arrived arou...

A new study reports that treatment with the experimental antibody “cocktail” known as ZMapp resulted in recovery in 100% of the 18 rhesus macaques treated with the drug, even when initiated up t...