Peering into the past, scientists discover bacteria transformed a viral threat to survive

Current Biology
Published May 9, 2019 | 11:00 EDT (News release from Indiana University)
Researchers report a previously unknown way that bacteria develop new genes to evolve and adapt to threats, insight that could help advance efforts against superbugs. Researchers describe the first known evidence of bacteria stealing genetic material from their worst enemies – bacterial viruses called “phages” – and transforming it to survive. A gene once used by phages as a weapon against bacteria is now used by bacteria to grow and divide correctly. 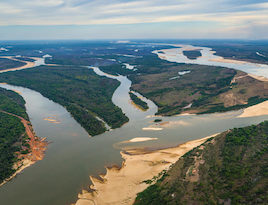 Nature Published May 8, 2019 | 13:00 EDT (News release from Nature Research Press) Only one-third of the world’s longest rivers (over 1,000 kilometres in length) remain free of dams and reservoirs...