Completing the puzzle of arthropod evolution 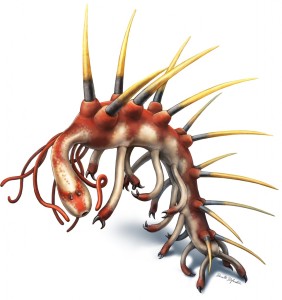 Hallucigenia sparsa is so bizarre looking that when scientists first reconstructed it they had it upside down and back-to-front. (Image credit: Danielle Dufault)

Newly discovered fossils from the Burgess Shale region are providing scientists with evidence of the evolutionary history of arthropods, a group including insects, spiders and crustaceans. The fossils have also allowed scientists to gather a complete picture of what Hallucigenia, an arthropod existing 508 millions years ago, looked like.

The new fossils show that Hallucigenia had a small but long head, at the end of a thin and long neck. The researchers were also able to determine that the animal had simple eye structures and circular teeth.

These fossils provide the first morphological evidence that arthropods belong in the superphylum Ecdysozoa.

A 30-year study on a Pacific atoll used for nuclear testing shows that all reefs developed a community composition quite different from that before the tests as the result of random settlement of ...

Most women diagnosed with early-stage breast cancer are given imaging tests to look for distant growths, despite official guidelines according to a new study. The research team found that over 79 ...