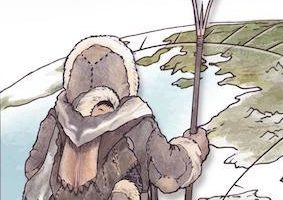 Nature
Published June 6, 2019 | 13:00 EDT (News releases from Nature Research Press and Max Planck Institute)
Analyses of the genomes of ancient and modern individuals from Siberia and North America, reveal insights about major migration events and the population history of these regions. Genomes of 48 ancient individuals from the Canadian, Siberian, and U.S. Arctic, as well as of modern populations, suggest that gene-flow between Palaeo-Eskimos and the First Americans shaped the North American population history – giving rise to both the Eskimo–Aleut and Na-Dene–speaking peoples.

Biodiversity today may not lead to greater diversity over geological timescales